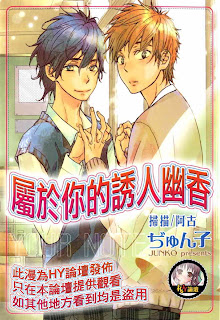 Summery
For some reason, Miyasaka finds himself absolutely enamored by the scent of his attractive male classmate Sawatari. But when he tries the cologne Sawatari recommends, the effect just isn’t the same–it has to be on Sawatari or the cologne won’t have the same effect.

A sweet story about the high school love between two boys.
Plus Three other unrelated stories.

My Thoughts on the manga
I've been trying to find the other three stories summery but I gave up on searching. It seems that the first story is the main one and whoever gave the summery only wanted to focus on that. Though the second story of the three extra's was really good, I will just talk about the first main story.

Miyasaka is a sweet normal highschool boy, who can get very jealous. He loves Sawatari scent and later starts to love Sawatari as well. To be closer to Sawatari Miyasaka buys the same scent that Sawatari owns but didn't know how to wear it and ends up putting on to much, which in turn draws the two characters closer together. Sawatari is a cutie, he loves how Miyasaka is straight forward and lets people know what's on his mind. Sawatari is quite a shy boy but also get's jealous when he see's Miyasaka around girls.

The Romance between those two are fast, since they both quickly fall in love and start going out. They even take a trip together and stay at a hotel togehter. It is all very fast but I guess that's what happens when you have only one volume to get the story across.

The plot is cute and exciting to read when you want to know what's going to happen next. The plot on all three stories is great too, espisially the middle one. There is only one plot line I didn't really like but I was glad that the other stories made up for it. 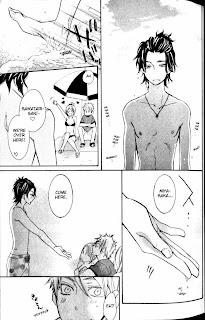 Manga Design
The design is cute, though not as good as other manga design's I've seen it's still just as good. There is detail in the backgrounds, if not a normal background then it has a gradient added to it. The boys of all the stories are cute and you can see a difference in them. There isn't much detail in the face but there is lots in the hair. Yeah I picked this page because of the chest image hehe!

Overall
It's an alright manga, I would have wished that the first story carried on more but it didn't. It's a good story if you like short stories.