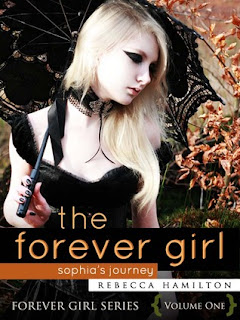 
Summery
Sophia Parsons’ family has skeletons, but they aren’t in their graves...

Solving the mystery of an ancestor’s hanging might silence the clashing whispers in Sophia's mind, but the cult in her town and the supernaturals who secretly reside there are determined to silence her first.

As Sophia unknowingly crosses the line into an elemental world full of vampire-like creatures, shapeshifters, and supernatural grim reapers, she meets Charles, a man who becomes both lover and ally.

But can she trust him?

It’s not until someone nearly kills Sophia that she realizes the only way to unveil the source of her family's curse: abandon her faith or abandon her humanity. If she wants to survive, she must accept who she is, perform dark magic, and fight to the death for her freedom.

My Thoughts on the Book
This book was…wow…I never thought I would like a book that centers on a witch. I don’t like witch books but since this had other supernaturals in it I decided to stick to it and finish reading it. I am so glad that I finished this book!!! It was great I loved every moment of it and I hated it when the book ended, I just hope the second book comes out sometime soon.


I enjoyed the characters they was a mix of different personalities. Sophia is a  newbie Wicca she doesn’t have many friends because of what happen long time ago and how everyone thinks she is studying the dark magic. Which is wrong because she only practices the good magic. She has a strong personality and is really stubborn when it comes to her relationship with Charles. She isn’t close to her family but she does have two friends Ivory and Lauren. There is not much interaction with Lauren but Ivory is in it a bit more then Lauren before she disappeared and reappeared halfway through the book before disappearing again. Charles is a sexy guy, though he can not make up his mind about anything. He wants Sophie but then he doesn't want her. You learn many things about him that keep you attracted/interested to him hehe!

The Romance in this book goes around in circles a lot. If you thought Twilight was bad with Edward hating himself and not wanting to be with Bella because he's a vampire then this is just as bad. Charles wants to be with Sophie but he shouldn't because of what he is. Then he goes and kisses her before breaking apart and change the subject. He then asks her to move in so he could watch over her but says she's to stay in the guest room but wants to be near her. . .like I said it goes around in circles for a long while. Sophie is no better she's confuse by how he acts towards her even when they feel the same way towards each other. Besides all the running around in circles they do end up together and they act so cute together. He's sweet and takes care of her, this book is diffidently not for teens because of how the describe the sex scene but otherwise it was a great romance from the middle onward.
The plot was so fun!! I really loved the plot it centers around Sophie and how she learns about another world she never knew before. She gets more pulled into it when she learns about her heritage and about the people around her. There is a few twists in this book that would make you freak go "What!!" not to mention that the ending will leave you wanting more. 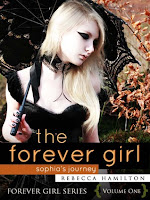 It is so beautiful!! I love her outfit and the Gothic look over her. The image really stands out and captures your attention right away. The model is so beautiful and the background is pretty too. Now I wish I could pull off that makeup on my eyes. The Title font is prefect with how it's placed in the middle of the book. Though it didn't need the "Forever girl series" at the bottom of the page. The bars under the Title is alright since it does match the orange background shown behind the girl.

Overall
I do recommend this book if you like the supernatural world and Witches. It's a great plot and once you get past the circles in the romance that's quite good as well. I'm sure everyone would enjoy this book.
Rating4 out of 5 Howling Wolves