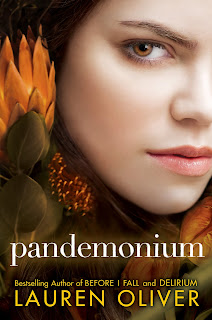 Lauren Oliver delivers an electrifying follow-up to her acclaimed New York Times bestseller, Delirium. This riveting, brilliant novel crackles with the fire of fierce defiance, forbidden romance, and the sparks of a revolution about to ignite.

My thoughts on the Book
That is some sucky summery right there, it made me double read it thinking what kind of summery is that!

Can I say "OH MY F***** GOD" this sequel was so damn good. It took me two days and almost an all nighter to finish this book! I was so hooked right when I got it. I was contemplating at the time whether to finish Until I die arc or not. I did wait and I just wished there was so much more. It was so short though there is over 300 pages. It just felt so short to me, probably because i read 77 pages earlier but still I'm going crazy to get the next book! I want the next book to come out now!!

Get ready for a few new characters, because there are a couple different people. Lena stumbles upon a group of people in the wilds where she learns to live with them and to survive in the wilds. Raven takes her under her wing and teachers her. Raven is hard to like, I just don't like the fact that she's harden and doesn't show much emotion but I guess that's what happens when you live in the wilds. You have to be strong and hard to stay in the wilds but I hate her. . . I do like Sarah though! she's a cute girl not to mention she has the same name as me haha. Tack is a strange man, he's mean like Raven but you can also tell that he cares. Unlike Raven where you can't tell what's she's thinking and just feel like you want to continue to hate her. Then you mean Julian, oh he's such a cutie. He talks about how he kept getting brain tumor and the doctors had to cut out pieces of his brain to get out the tumors. Then he mention that if he gets the cure it might kill him but he doesn't kill. I thought he was crazy when he said that but then I notice it was in front of people because I would be scared at this. You find out later that he really is scared. He is sweet and loves to talk about his past to Lena and he is strong for a boy who only knows that Deliria is a disease. When he learns it isn't as bad as he was told to believe he was fine with it and grew closer to Lena. In this book Luna is stronger and passionate about the Resistance. She had to grow strong and leave Alex, Hana everyone she knew behind. She had to make a new name for herself and live by that name. She wasn't the naive girl from the first book who was scared of the new things Love brought with it. Now she takes that love, hides it within herself and make herself stronger.

The Romance in this story is really slow, that's right there is romance. It's between Lena and Julian, yes I know it seemed it would never happen but slowly things started to change between the two of them when they were captured. They began to talk, though Lena tried to keep everything to herself, Julian started to talk to her about things that happen in his past which caused her to talk. Slowly as the days passed they grew closer together, even when Julian found out who she really was it didn't take long for him to stay by her side. They are just too cute together and I couldn't help but love it when they kissed or when Julian showed his curious side. I was giggling during those times because it was just too cute the way he acted.

The plot was great, I loved it as much as I loved the first book. It was scary during the times when Julian and Lena were captured because you didn't know what was going to happen. Not to mention the twists all over the story and how Lena finds out something about her mother. It was all great and the get together between Lena and Julian was great too. The ending though is what will kill you in the end. IT WILL LEAVE YOU GASPING AND WANTING TO KNOW WHAT THE HELL IS GOING TO HAPPEN NEXT. Seriously reading the ending I wanted to bang my head against the wall over and over again because of how it ended. HOW CAN IT END LIKE THAT HOW!!!!!

The cover is kind of, bam! in your face with another face. It's not as pretty as the Delirium cover, it might be because of the fact that it's orange but it's just not as eye catching. Though I do love the title of the book, the lower case font for a title is different and fits right on the cover perfectly. Though seeing the author's name bigger then the title is a little off for me but still the peice works good. I do like the U.K version of the book cover more so the the America version it's just more pretty then this one. I do wonder what the third book would be like.


Overall
I do suggest that if you hate cliff hangers don't read this volume till the third book comes out next year or you will go crazy. I'm already going crazy with that OMG OMG OMG cliff hanger. This series is great and don't hesitate to buy it!