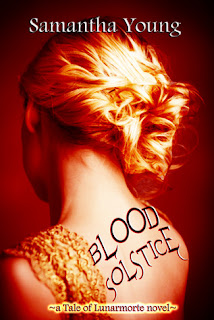 
Summery
Enter a world of fierce wolves, stunning magic and romance...
In the final installment of The Tale of Lunarmorte, Caia is caught between the most powerful beings in her world, and they are all desperate to use her for their own means. While Caia struggles to find her purpose, tragedy strikes close to home, and time runs out.
Now she must decide if she will join the extremists she was trying to destroy... or bring them all down on her own terms...
YA Paranormal Romance recommended for ages 16 and up.

My Thoughts on the Book
I gotta say this final volume took me a while to read, I just wasn't that much into it then I thought I would be. For one it being the last book always makes it hard for me to read cause i know they're won't be any others after it. Second the characters in this book didn't grab hold of me like it did in the other two books. For the term Lunarmorte not to appear much in this book it's weird that the over all series is called "The Tale of Lunarmorte" I just find it really unnecessary and the author could find a better name then that. Oh and guess what the word OK has only been used once during the whole book, thank god. I was glad by this book after the first two books took that word to a whole knew meaning of annoyance.
Anyways as for the characters. . .I'M SO DAMN ANNOYED WITH REUBEN. He is the most annoying character I've ever read. He's to damn cocky for his own good, he's personality is annoying and he loves pushing Caia around and making her do what he wants and doesn't let her get a say in it. I gotta say though by the end of the book I was alright with him because his personality seem to dim a bit. Besides him I thought the main cast of people are great, they work well with each other and Jaeden and Ryder are still so cute together. I also got use to Caia and Lucien being together.

The final plot was great I never would have expected the big battle in this book to actually happen. I wasn't really disappointed with the battle. It was so detailed and great from Caia perspective giving the feel the battle would actually give someone. Though I hated how every time Caia passes out it always skipped a big thing that's happen. Though I guess it's normal since it is written in Caia perspective for that chapter. Though I am glad the author found a way to semi end the war in a cool way. Never expect it to end in the way it did so that was great. This book didn't focus at all on the romance aspect, there was very little written about it but you still knew who loved each other and stuff like that. What I also hated was that the fact the author had little to know werewolf description in the book. Sure there was a few places where the characters turned into wolves, but it was automatically skipped like the author. I'm sorry but I really love it when the characters turned into a wolf and described them running and having fun in that form like in the first book. I'm annoyed that it only happen in the first book the other two books hardly reflected on their wolf half, which sucks big time.
Cover Design

This cover is so inventive when it came to the placement of the Title. The Title as you can see is placed on the back of the girl in the front. Which I know is Caia since Caia has blond hair I believe hehe. Anyways it's great how her back is all highlight. The black words of the title also stands out great against the back. The curve of the words falls the curve of the back and it works well with the whole look and feel of the cover. The Author's name is also fine where it is placed at the top of the book. Though the words "The Tale of Lunarmorte" could have been placed like the title or at least not so stand offish. It just doesn't work with everything else of this book cover.


Overall
I think this book did poorly compared to the other two books. I was so disappointed by how annoyed I was by it. My ratings keep going down from the first book to this one which is sad. So I recommended for you guys to finish reading the series and make your own opioins of this series.