Foxblood: A Brush with the Moon Review 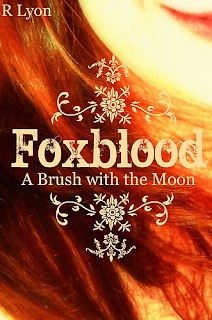 Summery
Sophie's life has finally turned good. She's moved away from home, is back with her best friend ever and is doing the one thing in the world that she loves, art.
Life's perfect...or is it?

Something's strange about her new home. People are dying and an old house pulls her towards its doors. Sophie's changing too; could it be anything to do with a recent fox bite? All becomes clear when she meets the seductive Sebastian and he reveals his family's secret.

Unbeknownst to the humans, battles between the realms have existed for thousands of years...but now it's war and Sophie is unaware she's about to be caught up in it. Can she learn to handle her new powers and release her inner goddess?


My Thoughts on the Book
Does anyone have any idea how hard it is to find any information on this book. . .No seriously the goodreads page is so outdated with hardly any information on the book on it. Plus the second book isn't even up on goodreads, just this one and the original look for this book. I came across this book back in December when I was trying to spend my giftcard on Kobo, so I went looking for books. Seeing this and thinking "Wow...a book with a fox bite" I had to read it. Now I read it and I'm so glad that I did. It was so great, I loved everything about this book and the only issues I had are really minor.

The characters are so well placed in the book, Sophie at first is really shy and liked to keep to herself. She only wants to focus on her study's more then anything else. That's why her friend Beth is there to help her come out to clubs to party even when she doesn't want to. She soon loosens up when she meets Sebastian changing her in a lot of ways. He opens a life she never knew about full of love and heartbreak. Beth her best friend is a selfish person who doesn't have feelings at all and only cares about herself. . . No really that's what I think of Beth. She annoys me with saying me things to Sophie not really caring about her feelings but Sophie doesn't see this, she only see's a friend. Sebastian is a hot sexy boy with blond hair and turns into a werewolf on a fullmoon without control. Even though the werewolf he turns into is something I really don't like (meaning the more human the animal version of a werewolf) I still like the fact that they transform either way. He is a smooth talker and loves Sophie but he also loves his job so that comes into conflict a lot with the two of them. He's fun to be around and knows how to talk to girls, Sophie is his first real girlfriend so he's learning how the whole girlfriend/boyfriend thing works.  Towards the ending of the book though I find that he really doesn't care much about Sophie, which is so annoying because Sophie, even though she tells him he doesn't listen. Then there is Connor, oh he's such a cutie boy, though he doesn't know how to talk to Sophie you can see that he likes her and even tries to put the moves on her a few times. He is Sebastian's cousin and also a werewolf, where Sebastian lacks in caring for Sophie Connor is there to pick up the slack. He cares so much about her and wouldn't let anything happen to her even when Sebastian is gone or is there for that matter.

The romance is so fast but Sophie at first tries to make it go slow which helps. Between Sebastian and her you see the chemistry between them and they can't help themselves but to make that chemistry go somewhere. So Sebastian kept being persistent and finally they're together. You can see how much Sophie loves Sebastian even though time and time again he hurts her. Later you see that her and Connor almost having the same kind of Chemistry. I do hope in the second book something happens between Sophie and Connor.

As for the plot, it was great, it was new and exciting. With the use of werewolves, vampires and demons the whole story worked out right. Not to mention that the werewolves are the olden type of werewolves, not the new type. The plot is mainly focused on Sophie and her view of what's happening around her. It takes place at university in England (didn't know this till a bit later on). She moved closer to the university to be with her friend Beth where they both stayed in the same apartment. It doesn't take long before Sophie, meets Sebastian and there relationship kicks off. With Connor also wanting to be with her and bad guys who want her around every corner this whole story is great from start to finish.

I guess what first caught my attention with this book is background cover. It's so brightly orange I just couldn't turned away. Then it was the title Foxblood, I don't know but seeing that title made me want to click to read about it. The whole design stands out and catches your attention. Though the background image of the girl, the mouth bothers me for some reason...like either it's to wide or it shouldn't be placed there. Other then that the hair is great showing how it is in the book. As for the Title font I love it. With the simple word "Foxblood" in big letters while "A brush with the Moon" is fit well underneath it works all other with the composition. Not to mention that the Intricate designs are so pretty! The author's name though could have been placed underneath, instead of on the top left hand corner of the book.

Overall
It was a great read, with hot boys and a great plot. I would recommend buying the book I'm sure you all will love it just as I did.