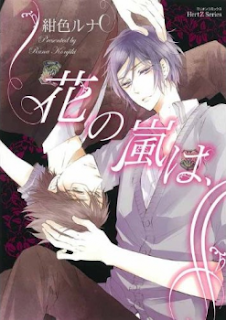 Summery
Sagano and Hazime Itirou face off at school and in their private lives, where traditions such as flower arranging and tea ceremony carry heavy responsibilities. With the weight of these things and the accompanying dark emotions, love can only come in a storm...but is it a love that can survive?

My Thoughts on the Manga
When I first started to read this manga I so didn't know what they're ages were. I didn't know if they were in they're twenty's or in their teens. Guess what I found out 10 pages in, they were actually aroun 12-13 when the manga first starts. Two years later they are in highschool and meet again. Can anyone give me a eye twitch judging by what they do in the first few pages! my god I was so weirded out by what their real ages were.

The characters are bland given the roles they play. Sagano is a guy who doesn't really like girls because of what his mother did and so sleeps with man because he wants to feel something. That's where Hazime come in, he came to vist Sagano when they were younger. Sagano then sadusess Hazime in spite and they sleep with each other, afterwards Sagano tells Hazime he hates him and ask him to leave. I wish they're was more to this story but not much with the characters.

The Romance is weird and accurded, judging how stubborn the characters are. It's weird that they even ended up together in the end. There really isn't much I like about the romance, then again if I don't like the characters then I wouldn't like the Romance.

Despite everything the plot wasn't all that bad, it had a sad background and a great ending. You see the character Sagano slowly realize his true feelings towards Hazime. I guess that's what made me continue to read this book in the end, despite the way the characters acted.

Manga Design
I have no sample image but I will describe it the best that I can. The characters are so poorly drawn I couldn't help but feel annoyed. Don't get me wrong I've seen worse drawings then this but it didn't help that the whole book in a whole wasn't that good. The characters eyes especially bother me I couldn't help but feel annoyed when I looked at it. Not to mention I didn't even know what their ages were when I first open the book. The mangaka probably doesn't know how to draw younger boys only older ones showing that this type of story shouldn't have been drawn by this mangaka. This surprises me since it's a 2011 yaoi manga, I expected the detail to be so much more.

Overall
Don't read this manga it's not suitable for people who aren't all that into yaoi to began with. It's okay to look at if you find it online otherwise don't bother buying.