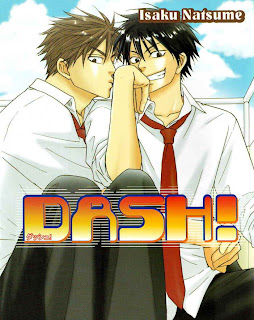 
Summery
Akimoto has just started his high school career at Miya High and is burning with enthusiasm. Not because he's in the springtime of his youth, or because he has his eyes set on some beautiful upperclassmen; rather, Akimoto is overjoyed to finally be able to meet his long time Judo idol Saitou! Akimoto has watched Saitou ever since his middle school days, but the real Saitou isn't matching up to the Saitou of Akimoto's dreams. Foul mouthed, with a bad attitude and superiority complex, Saitou decided to use Akimoto's admiration against him and turn him into his slave.

But Saitou has a deep, dark secret that he is hiding from his kouhai (junior). Will Akimoto still look up to Saitou when it is revealed? Join Akimoto, Saitou and the rest of the Miya Judo team in this charming tale of high school love between sempai (senior) and kouhai.

My thoughts on the Manga
I thought it was cute how these two first met and I just kept reading from there. It's not the best Yaoi book out there, nor is the drawings all that good but the story was so intriguing I just kept reading anyways. Not to mention that the the upperclassmen Saitou has an attude about him you just want to know more about him.

Akimoto is such a strong looking person compared to the skinny and cocky Saitou. He has a great build for Judo and the only reason he kept with Judo and not quit is because he wants to someday be as strong as his idol Saitou. He doesn't mind how Saitou treats him as long as he is by Saitou side. Saitou is really cocky and hides the fact that he got into a accident years back and injured one side of his body. Though his walking improve his arm still needs to go through therapy so he doesn't do Judo much, which annoys Akimoto since he doesn't know the real story, all he thinks is that Saitou is being lazy and doesn't care about Judo anymore.

The romance between these two are cute and slow. At first Akimoto doesn't know what his real feelings were until he started to have dreams of a sexy Saitou. One of the scenes that happen is that Saitou, his friend oka, Akimoto are walking home and Oka explain how one of his eyes were bad. So Saitou turns to Akimoto and points to his eye explaining which eye was bad to Akimoto when out of no where Akimoto kisses him. It was so damn funny and cute and that was one of my favorite scenes of the whole manga.

The plot is really good when it's explain why Saitou can't do Judo anymore and why he's always in a happy mood despite the injury. It's great how Akimoto starts to help Saitou with his arm after they get to know each other more. As well as watching them fall for each other and see Saitou's jealous side at the end.

There is also a side story to this manga which is just as good. It's between cousins and how one left home because his parents don't come home no more. He finds his cousin and convinces him to stay with him saying he ran away from home. He also explains to his cousin that he was escaping one of his loves who doesn't get him when he tries to ends it. His cousin being good after an old promice lets him stay even when he makes sexual advances on the cousin. In the end they fall in love and stay together in a small apartment haha! it's a cute story and a great bonus. 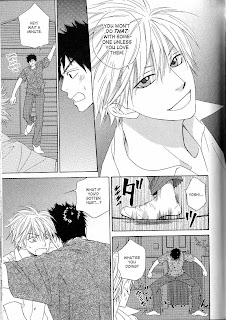 The design is simple but good as well, the author loves all kinds of area shots not just one. You can also see that she takes the time to put a gradient in the background. These two characters are also in the side story at the end of the book. As you can see the details in the background are not a lot but you can still get the gif of it. Either way it takes time to get use to this style of drawing. I've seen it before so I'm use to it. Believe me read this manga for the story not the drawings!


Overall
The story is cute and the characters are memorable because of how different they are from one another. It's not the first time I've read a story about a accident happening to one of the characters but that doesn't make it any less new and interesting. So if you can read it when you can I'm sure you will like the story!