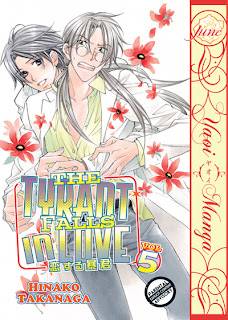 Kaiousha
Volumes:
Volume 2 out of 3


Summery
Morinaga has finally achieved the impossible! He's living under the same roof as the ever aloof (and totally gorgeous) Tatsumi... but the sad truth is that Tatsumi's bedroom remains under lock and key! Is this serious signal that Tatsumi wants nothing to do with his crushed out housemate? or will the door swing open just enough to let Morinaga in for a little visit?
The Tyant Falls in Love takes two men out of the lab and forces them into the bedroom for a hot and hilarious series of near misses. . . and surprisingly sizzling trysts? How long will it take for a sweet heart and a surly bully to put their differences aside in the name of penetrating passion?

My Thoughts of this Manga Volume
This is a great manga, this is one of the oldest series I've read and it's still not fully out in volumes yet. Not to mention recently the anime came out! I was so excited to learn that! It was so damn good!!! haha!! anyways back to the review!
In this Volume Tatsumi is as stubborn as ever, I don't think he will ever change. Not to mention he is still weirded out by the whole gay thing he just doesn't know how to act towards Morinaga who loves him. Morinaga is still so deeply in love with Tatsumi that it's just so sad he always gets beaten up and takes it cause he loves Tatsumi. Tatsumi does have a cute side though when he's not yelling at Morinaga.

Romance is there though no real love except for Morinaga who loves Tatsumi so much and yet Tatsumi is so damn stubborn he doesn't love Morinaga at all. Though he does let him sleep with him but that's it. But something does happen in the story that is laughable as well as cute but i can't spoil it, it's just too cute.

In this volume Tatsumi takes a trip to Canada to work on research for two months, leaving Morinaga by himself. It's really is a cute and simple plot I love it so much and then Morinaga comes to vist and you can see that Tatsumi wants him to come to his condo but Morinaga doesn't realize this till Tatsumi pulls him inside. There is also a side story about Morinaga older brother and his old friend and I think it's pretty cute to see this happen even though there is bondage and rape involved. . . 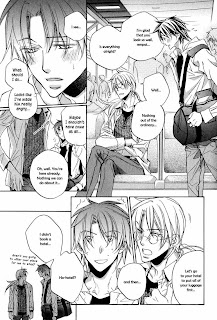 Cute, cute cute and cute, even though their eyes are not very detailed it's still a cute style of drawing. Not to mention that most of the time there is much detail in the background. The clothes also have a lot of detail in it. The designer took the time to do the clothes but not so much in the hair and face but still looks good either way. I do love the way these characters are design it's cute and simple style that I like.

Overall
I really do love this series of books, it's well put together and the characters are cute and have great personalities, I recommend everyone to check it out!