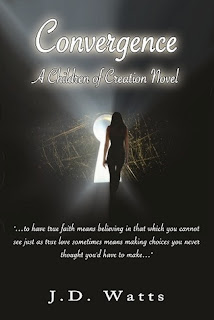 Summery
In modern times, mankind believes they know all that there is to know about the world around them. Arrogant in their ignorance, they travel through life completely unaware of the other beings in their midst, the other Children of Creation. Celestial Angels and Fallen walk amongst them unseen, while the third beings of creation, the Guardians, live along side them, protecting them from attacks of the Fallen.

Daniella Rossi is a nineteen year old college student who sees the world quite differently than those around her. From infancy, she was aware of the beings that walked among her kind who were not like them, as well as her own personal Guardian who watched over her. Dani always knew she was different, but she never dreamed the full scope of her importance.

Follow Dani as her life takes an unexpected turn when a new Guardian is assigned to replace her lifelong companion and friend. Much older, more experienced, and socially awkward, Nathaniel must learn to adjust himself to fit into Dani’s world in order to guard her without drawing unwanted attention. While the Fallen are determined to capture Dani, she and Nathaniel find themselves developing a bond that goes far beyond that of Guardian and charge. Facing the strains of a brewing war and forbidden affections, will they be ready for the coming battle? Will Dani be able to handle the truth of her existence and destiny?


My Thoughts on the Book
I was never really interested in books about angels but this is my second time reading an angel book and again I was happy with how it went. I wasn't disappointed at all and loved every moment of it. Though I was surprised by how close this book was to real angels and how they follow under god's rule, well the good ones anyways. The only thing that really bugged me about the book was the fact that there was a part in the book where they went back showing a different point of view. That annoyed me a bit so that's why it isn't a complete 5 out of 5 stars.

Dani is a great character, she's not a girly girl but more of a tomboy type of character. She doesn't like wearing anything to girlish. She's strong and is passionate about her school work. She loves going to College and not even the threat of the fallen angels will stop her from going. She cares a lot of Ana her guardian angel for the longest time. She thinks of Ana as her mother like figure and she was depress when the Master(god) made the change to have Nathaniel take over, who she nicknamed Nate. Nate is a Guardian, a Guardian is a type of angel who looks after human they are told to protect. They protect them from the fallen angels and live close by to be near their charges if anything happens. Now to explain Nate I have to mention that Guardian's are made so that they protect their charges from anything and they aren't given emotions. So he's always stiff and only cares about his job of protecting the human he's in charge of. Though that changes when he meets Dani, and your going to have to see why when you read the book hehe. Ana as I said above is a mother figure towards Dani, she's been with Dani ever since she was born. She loves Dani as any mother would because of how long she's known her. Like Nate she doesn't have any real emotions but with Dani it's different. I do love these characters and they work well together making Dani feel more at home when they're together.


Hardly to no romance in this novel but that doesn't mean there wasn't any chemistry between Dani and Nate. There relationship was slow and took a long time for them to fall in love. Not to mention that Nate also needed to know what he was feeling was love. It's cute seeing how it happen at the end of the book and you will wish for more between them but that's why there is a second book.

The plot is great, I love everything about it, everything is just so exciting to read to see what will happen next. A few twists though that will keep you guessing making it extra great. Not to mention that you learn who Dani really is and why everything is falling apart around her and why she has two Guardians. Not to mention you learn more about angels then any other angel book, well from what I read anyways.

Cover Design
I don't really fine the cover all that interesting, It's kinda plain with the focal point being the middle. Not to mention the large quote right on the front cover spreading right across it. I wouldn't have made the quote that big. I know it's a ebook but still it takes away from the rest of the image. The Title font of the book is alright but it's different from the rest of the font inside the book which I don't really like as well. It's a okay design but it could have been a lot better then what I see right now.

Overall
Great read if you love Angels so pick it up when you can, besides that little back in time to show a different point of view I did love the book and I can't wait to read the second volume.