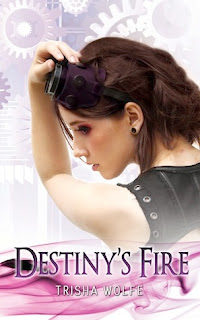 Summery
It’s the year 2040, and sixteen-year-old Dez Harkly is one of the last of her kind—part of a nearly extinct race of shape-shifters descended from guardians to the Egyptian pharaohs. Her home and her secret are threatened when the Council lowers the barrier, allowing the enemy race to enter the Shythe haven.

As the Narcolym airships approach, Dez and her friends rebel against their Council and secretly train for battle. Not only is Dez wary of war and her growing affection for her best friend Jace, but she fears the change her birthday will bring. When Dez’s newfound power rockets out of control, it’s a Narcolym who could change her fate… if she can trust him.

Dez’s guarded world crumbles when she discovers why the Narcos have really come to Haven Falls, and she's forced to choose between the race who raised her and the enemy she's feared her whole life.

My Thoughts on the Book
This was just wow, there isn't a word to describe how much I loved this book. The fact that this is my first Steampunk novel I ever read made it that much more exciting. I learned lots of things from this book about Steampunk that I never new before (i.e hoverbikes). I finished this book in two days that's how exciting it was to read. It even had Shape shifters worked into the mix of the Steampunk genre which made it that much more better for me to read!


The characters in this book are so interesting to learn about not to mention that there is triplets in the mix. I've never read a book where there was triplets in it so this was a first for me. The main girl Destiny or Dez for short by her friends is the only one of her kind as far as she knows, until she meets Reese. She has to hide who she truly is from everyone including her friends. Only her mom knows how different Dez truly is. She is a strong person in this book, she doesn't back down and isn't the girly girl type like her friend Lana. She grows into herself more as the books go on and she learns how truly special she really is. Jace who is her friend but you find out he thinks of her as more then a friend later on is a good boy type of guy. He is strong and loves to train even when they were not allowed to fight or train. He hates the Narcos more then anyone else int he book, his brother and sister and even Dez go along with it. He is like the leader of their little group. He knew something was wrong with the Narcos all though out the book he didn't like how the Narcos came to their city. Lana and Nick are the other two of the triplets. Lana is Dez's best friend, she is the happy go lucky girly girl who loves to wear short corsets. Lana never stop being Dez's friend even when Dez told her the truth so that is a real friend right there. Not much is talked about with Nick but he's there anyways. Reese is the hot bad boy type. You don't know much about him but you can see how much he cares for Dez, not only that they felt connected because of how similar they really were.

The Romance in this novel is basically a love triangle between Dez, Jace and Reese. I know most people don't like random love triangles but I love them! They are great and it's especially exciting in this book since there is both a good guy and a bad guy. The romance was fast acting since Dez and Reese is so connected by having them both being the same species of mixed blood. I wanted them to go further but each time it's interrupted or that Reese is too good of a guy to just take Dez on the ground in the forest (hint hint hehehhe) anyways Jace comes in later when Dez thought Reese broke up with her. Though he is led on by her cause she only saw him as a friend though a very hot friend. I love the love triangle and I really do hope there is a second book with more love triangles situation.

The plot is great, it's a new take in the shifter world because it is mixed in with Steampunk genre. Steampunk is a big deal in this book because lots of it is connected to what they're power purpose is. Their shifter species have to serve the humans with their powers somehow or they will start to lose their powers or get sick. It has something to do with a curse started long ago. The Kythan are the species Dez and her friends are then they're are two types one called the "Shythe" the other called "Narcolym" there use to be a third type but the Narcolym wiped them out long ago. The Narcolym and Shythe have been in war for a very long time and almost wipped out all of the Shythe. This fact is very important in the book and you learn why when you read it.

The cover is so eye catching and colorful with the purple that it caught my attention right away. I loved the flame like purple on the bottom giving a hit as to what her power color was when you start to read it. I also knew right away that it was steampunk because of the goggles on her head. When I read the summery I knew I was right, she is so pretty and fits her look from the book really well. The gears in the back though faded work so well with the rest of the image. As for the title font and look it's well done and pretty with the gradient of dark purple and black and the faint glow behind it. As for the author's name it's well placed below the title but not very well seen because of the white font.


Overall
I do recommend reading this book, it's a great new type of story with a great plot and characters. Not to mention that it has steampunk in it. If you never read a steampunk novel before this is a great one to start getting into the genre.