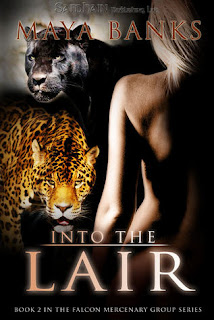 Into the Lair
Author: Maya Banks

It was supposed to be an easy mission. But nobody told her that.

Ian and Braden Thomas return to the U.S. to extract Katie Buchanan, the sister of the teammate who betrayed them. She could very well be the key to taking down the man responsible for turning Ian and Braden into unstable cat shifters. Unfortunately, they’re not the only ones after Katie.

Katie has no intention of going quietly or of offering her trust on a silver platter. She’s got troubles of her own that don’t include two pain-in-the-ass men who claim her dead brother sent them. She’s too busy trying to stay one step ahead of Ricardo de la Cruz, the brother of a man she killed.

As the bodies pile up, Ian and Braden are only sure of one thing: Katie makes them crazy. Something about her calls to their inner predator. They both want her, but she’s made a practice of making bad decisions and trusting the wrong men. And by the time she realizes that she can trust these two warriors, it might just be too late.

My thoughts on Book
You know I love the sex and all that it's really great, I mean who can't love a three some with two hot boys...*drools* anyways I seriously wasn't into the book till the very end. Know why, it's because they finally figured out that when Ian and Brandon turn into their cat forms, THEY ARE ACTUALLY NICE AND WON'T KILL PEOPLE UNLESS PROVOKED. That was the only issue I had with the whole book. For most of the book except the ending they were so scared to be in their cat form when in my mind i'm shouting for them to transform into their cat forms so that can see they won't harm anyone and that they are cute sexy kitties! Gah!

Anyways the Characters Ian and Brandon are so cool, they are brothers and they don't care about sharing a girl. HOW HOT IS THAT I feel like drooling *smacks self* anyways Brandon is a joker, jokes about anything even when the situation is serious. Ian is the serious careful type, he analyzes everything and make sure everything is planned out. The contrast between the two is so great and they are so damn sexy cause they can turn into a Jaguar and Panther. As for Katie, she's annoying she finds any moment of the day to run away. I know I know it's because she's scared and doesn't know who the brothers are but come on later on in the book she tries to run away again *head desk* it gets old really fast.

Romance...wow it's just wow, yes it's slow and stuff till they get to the hide out and then it's like. . . where the hell did that come from. No seriously she's injured and Ian is taking care of her and she asks him to stay with her and right away he thinks she wants sex . . . which she does but seriously just before they hated each other...even before that on the plan when Brandon suddenly kisses her. Sure he was attracted to her for some reason but to suddenly kiss her like it's nothing . . .this book really turned around in the middle of the book like the author couldn't wait a bit longer before writing the sex scenes, which let me tell you went on for quite a bit. . .

The plot was a lot better then the first book I found. It was a lot more adventure at the very start then the first book which went into the sex. This book told the story of Katie and how she was the sister of Gabe and Ian and Brandon finding her, losing her, finding her, losing her, finding her. . . anyways the chemistry between the three was great. Like I said before the two brothers love her and she loves them back. I love the ending when Brandon says he could control the change. . .annoyed that he never mention how he just came to terms with his cat allowing them to live side by side. So they still don't know how to help Ian or D for god sake *head desk* this was also the most frustrating Book ever. I love shifters but to see how much different and hated they were of the shifters it was so damn annoying.

It's is the most beautifulest cat shifter book I've ever seen. Look how much those two cat's stand out. It's a great placing and the pictures were well take and placed well on the cover. The girl also stands out in contrasts to the big cats and she looks so beautiful and wild. The Title of the book placed at the bottom is great as well. The glow of the words stand out against the pictures and the darkness of the book. The Typography also works well as well as the letter spacing. The author's name though looks out of place being at the top of the book in a dark font which you could hardly see.

Overall
This series is great except for a few miner details of the book. The sex scenes are great but that's about it the story is bland and annoying and the cat shifters hate their other half which I fine annoying how much they hate it. It looked like there would have been a 3rd book but the author seems to have no reason to make one since this story was written in 2008 a book to finish the series is hardly unlikely so that's another reason you might not want to get this series.
Rating
3.5 out of 5 Howling Wolves