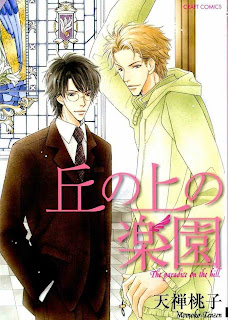 
Summery
The paradise on the hill
Kijima and Ono are two good-looking male teachers who teach at a girls' school. When Kijima witnesses a student confessing to Ono, an embarrassed Ono asks him for advice on how to reject such girls without hurting their feelings. This initial encounter leads them to become quite comfortable in each other's presence, and they often have lunch together. But when Ono admits that the real reason for his turning down all the students who approach him is his unrequited love for someone, Kijima is surprised by the disappointment that assails him. Why does he suddenly feel so interested in Ono's love life...?

Short Story - Summer Rain
Ten years ago, 18-year-old Motomi fell in love with a married man. Feeling guilty about stealing him away from his wife and young son, Motomi rejected him and moved away without a word. Now, he has finally let go of his hopeless love and feels sure that the other has done the same. But one summer day, he receives a letter written in a well-known hand, summoning him to the cafeteria in which they used to meet so long ago...
My Thoughts on the Manga
How is it that a 20 page short story was more interesting then the main story. I was just so bored with teh main story I wanted to finish it as fast as I could. Not only that, there was little to no kissing in it and the plot sucked. I wanted more stuff to happen but it didn't which annoyed me far more then I expected that it would.


The characters are bland and don't make you feel connected to them in any way. Though seeing them together is cute, there is hardly any background to them. Kijima is a normal looking teacher not so popular with girls while Ono is really popular with girls. The two of them hang out a lot and they are both really dence when it comes to each others feelings. I just don't find those two characters interesting at all. As for the side story, though it's really short I felt drawn into the characters and their story. I wished I knew more about them, I wish they had their own story because that would have been way more interesting.

The Romance is really slow in the manga, there is hardly none at all and very little in the very end. If anything I would have been completely fed up with this book if it wasn't for the short story at the end. Though there wasn't any romance in the short story it still made it so very cute.


The plot is terrible in the first story, it's common and unoriginal and not something that I would ever want to read again. As for the second story it sounded like it would have been heart wrenching if it was a longer story, put into more detail. If only the side story would have been the main story this manga would have been way more interesting. 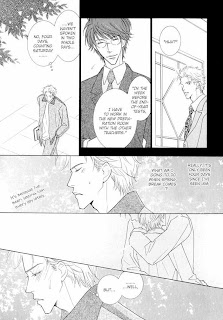 This is a really olden style type of manga. If you look at the style of the school uniforms which are long, it usually means it's old but this manga was written in 2002. Since it's the early 2000's when this book was written it makes since for how the drawings look for it matches the time period. The background is has minor detail while the characters also have little detail put into them. Though it is good that they have their own looks and you can see their expression well. Though the girls in the story all look the same. . .


Overall
This Manga is alright not the best, I don't recommend buying it though if you find it online then read it or at the very least read the side story.