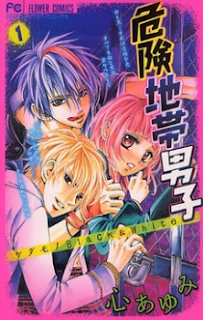 Summery
High school girl Kurei-chan attends a school that is located near two other high schools. The other high schools are famous for their gang leaders, the Black leader and the White leader. One day after going to the market, Kurei-chan decides to jump a wall to enter the school faster. Unfortunately, she jumps in the middle of a fight between Blacks and Whites. Of course, they are all attracted to her--she is a girl after all! Kurei-chan tries to defend herself by throwing tomatoes at them, but her effort just makes them more upset! Her hero appears on a bike. He is Kuroki-kun, the Blacks' leader and he is there to save her. A link has already been developed between those two. But the white leader has watched everything from behind, and a new game has started: Kurei-chan is the new target!

My Thoughts for the Manga
Here it is my first straight Manga review!!! I know I've done tones of Yaoi reviews but I decided to take a change and review a straight one with an actual boy/girl pairing. Though i'm going to have to find a better story because this killed me. You know when I first read the summery I was so excited about this manga. The story plot looked really good since I love it when there is two boys in a story fighting over one girl. Though as I began to read this book I started to see stuff that annoyed me so much, I actually wondered why I even bothered with it. Whether it's the translaters fault or the mangaka either way it really ruin the story.
The manga skipped over areas so many times, I got confused in almost every chapter I read. One minute the black king is fighting the next he's by Kurei-chan being nice to her. One minute they are together and for some reason I don't see how he wants to break up with her. I mean for an example when the black king was being held captive by a random gang and the white king came to save them Kurei as so excited they could escape but then the white king says this "You are only with Kurei-chan because she chooses you and not me" and then the black king turns to Kurei-chan and says "Lets break up" IN WHAT PART OF THE STORY DID IT SHOW THAT THE BLACK KING WAS USING KUREI-CHAN. He practaclly never say her ever with the white king so how he came to that conclusion was beyond me.
I hate the story skiping plots in this manga it was confusing and annoying at the same time. I don't think I'm going to read the other two volumes of this manga because I just don't think there is anything else that could make this story any better then it was now. It actually bored me and that was so damn surprising.
Another issue I had was when Kurei-chan right at the beganning fell in love with him. She broke into his school ran up to him and hugged him telling him her name . . . I don't know about you guys but that's just creepy. I just don't know how a girl can fall in love with a guy she hardly even met with. I think the author just wanted a fast way for them to meet up again. *sigh* 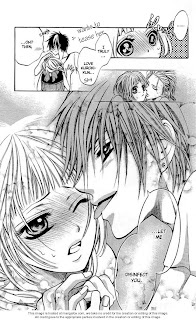 I guess the only highlight of this manga was the drawings and the style of the characters. I really do love how they were drawn as you can see on the left very sexy in the way the boys look hehe. The expression are well drawn as well as the hair and clothes. Not to mention the backgrounds as well. If only the story was better then it wouldn't have been such a waste of a good style.

Overall
I don't actually suggest to read this manga. It was really bad plot lines and really bad dialog. Though the drawings are great that doesn't mean the story is great.


Rating
1 out of 5 Howling Wolves