Foxblood: Rise of the Hellion Review 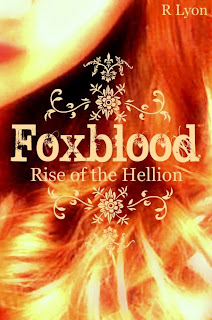 Continuing the story from A Brush with the Moon, Sophie is settled in her new life. Things are going well. She’s enjoying university life and her newly found independence. That is…until her mother’s unwelcome arrival!

Her love life has certainly improved, but that has brought about its own complications. Her new boyfriend, Sebastian, is not human and, as if that weren’t enough, his cousin, Connor, won’t take no for an answer. Sophie must decide which is stronger, her loyalty to Sebastian or her growing feelings for Connor And love is not Sophie’s only battle. Pulled from a life of obscurity and chosen to succeed a dying Goddess, the girl that arrived in Fosswell is no longer visible. Along with her new power and appearance changes, Sophie now has to contend with unwanted night time transformations. Can she learn to control the animal inside? More to the point, can she hide the supernatural world from her mother?
The death count in Fosswell is mounting and when someone she knows is found dead and someone she loves gets the blame, Sophie is determined to find out the truth. Unfortunately, the truth is sometimes something we don’t want to hear.

My Thoughts on the Book
I really saw no big surprise in this novel, Basically all the problems that were in the first book is the same in this book. I did enjoy it but it wasn't as exciting I would have thought it would be. Sebastian is still a dick head and Connor is still minding his own business. I also hate the fact that this story has so many skipping points and so many times where Connor is so out of the story you wonder if he was ever a main character to began with. Not to mention that the mother died out of no where making me think the author just wanted to get rid of her fast. I also thought they would explain in this volume what they meant by in the first volume how Sebastian wouldn't care if she slept with Conner. Something is up with that but the author gave no explanation in this volume.

The characters in this volume is the same, there hasn't been any big improvement from the first volume. Not to mention I hardly felt any connection with any of the characters. Yes, my favorite character is Conner but seeing him not in the book at all, like basically during all the skipping scenes and him being in jail there has been no interaction with him at all. What I mean but skipping scenes is that the author loves to skip weeks ahead for no real reason as just to pass the time saying nothing happens at all during those few weeks or so. Which I got to say after a few times of seeing this I really was annoyed by the end of it. As for Sebastian. . . god I hate him! he is such a ass who cares for no one but himself and his family name. I don't see how Sophie could still love him after the stunt he pulled. Not to mention that he doesn't trust her and trusts his family name more and that he bought her things to try to win her over. He is such a obnoxious ass I hate him. Why can't Sophie be with Conner who obviously care more about her the Sebastian does.

The Romance was hardly non-existent in this volume. It went by so fast that I don't think the author even gave any romance a thought. Not to mention that the chemistry between Conner and Sophie is more in this book then the last but again it's ignored by the skipping weeks scenes.

As for the plot is was alright not all as interesting as in the first volume. Plot twists were shown and dropped just as fast like the scene with Sophie and her dead father. Another is Sophie's reaction to Conner but again that's ignore. This book was just all over the place with unnecessary plots or the author could have taken the time to put more thought into it because this book could have been longer. As for the main plot with Sebastian's sister, it was weird and ended all to quickly. Then the ending with a big battle, the first volume has a big fight at the end as well, was it necessary for there to be a fiight at the end of this book no not really. It just felt like the author just wanted to do something exciting and placed the fighting scene at the end. Could have done just as well in the middle of the book but nope it appeared out of no where.

I guess what first caught my attention with this book is background cover. It's so brightly orange I just couldn't turned away. Then it was the title Foxblood, I don't know but seeing that title made me want to click to read about it. The whole design stands out and catches your attention. Though the background image of the girl, the mouth bothers me for some reason...like either it's to wide or it shouldn't be placed there. Other then that the hair is great showing how it is in the book. As for the Title font I love it. With the simple word "Foxblood" in big letters while "A brush with the Moon" is fit well underneath it works all other with the composition. Not to mention that the Intricate designs are so pretty! The author's name though could have been placed underneath, instead of on the top left hand corner of the book. If you notice it's the same comment on the cover design as the first volume good. You can see that there is no difference.


Overall
I still like the series and I did like this book at some parts but I was more disappointed then anything. It could have been a lot better and hopefully the next volume is better.