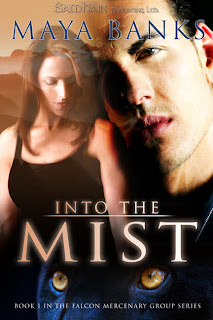 Into the Mist
Author: Maya Banks


Summery
One woman's mission to bring down a sexy elemental shifter turns into a battle of wills.and hearts. Falcon Mercenary Group, Book 1 Hostage recovery specialist Eli Chance has a secret. He was born a shifter. A freak of nature. While on a mission, Eli's men and their mercenary guide are exposed to a powerful chemical agent, and suddenly his secret has become easier to hide. Now he's not the only one with the gift. But for his men, this "gift" is becoming more and more of a curse. Tyana Berezovsky's brother Damiano was the guide for Eli's team and was the worst affected by the chemical. As he grows increasingly unstable, Tyana fears she's going to lose him to the beast he is becoming. Tyana will do whatever it takes to help him, even if it means using her body to go after the one man she thinks holds all the blame-and possibly the cure. Eli Chance. Warning: Violence, blood, guns, knives, ass kicking, people who do mean things, bad people dying, explicit sex and smart mouth.


My Thoughts on the Book
Can I say that the key word in this book is Mist. . . no seriously when they said shifters the first thing I thought was animal shifters, as you can see the cover had a panther on it but no that's not the main thing. The main shifter in this damn book shifts into mists or fog or what not, that's right people Eli the main shifter turns into fog. . . THAT IS THE MOST WEIRDEST THING I'VE EVER READ. I was so annoyed though I'm happy to learn that the second book actually does have animal shifters so that's a plus in my depression in this book.

The characters were really great the author put a lot of thought in their personalities and what not. The two main characters Tyana and Eli both have great backgrounds story's though sad they are still good, well thought out. Tyana I love her strong personality, with the group she works with I guess she needs to be but I love how she can kick ass. She does what ever she needs to do to get the job done even if it means turning back on her family/group. Eli is a hot mist shifter person. . . yeah I'm annoyed on the whole mist thing but I do love how he wants to trust Tyana so much and not just looking for a great lay haha. The other characters are great as well along with Tyana brother D. I can't wait to read the second book which tells the story of Eli partners Ian and Brandon, who are real shifters since they turn into a Jaguar and Panther.

The Romance is fast but them falling in love with each other is slow and don't confess till near the end. They love sleeping with each other haha, and I think that what makes them open up with each other and soon fall in love. It's a cute relationship especially with how Tyana acts with her stronger appearance and stuff haha! Eli just takes it and lets Tyana beat him up now and then haha.

The plot is great, it goes into the background in how her brother got infected with something that makes him turn into different things if he isn't careful. Tyana goes and tries to find a cure for him before D can't handle it any longer. There she meets up with Eli and his crew where she learns that it's not just her brother D that's having problems controlling his shifts.

Love the effects of the very background where the girl is faded out to show the background almost like a mist type of thing. The guy could have been better image, since it looks a bit pixelated to me. As for the panther....there is no main character in this book who is a panther so why it's there I have no idea and it annoyed me cause I thought it was a panther book to began with. Anyways as for the title I love the look of it. Sitting above the eyes of the panther and glowing against the black clothes. It's lovely placed and doesn't obstruct from the image in the back. The author's name is alright being placed there though I would have gone a bit higher instead of having it on the people's heads.

Overall
This book was alright over all, it wasn't the best I've read and it's not what I thought it would be but otherwise it was good. If you want to read about a great action book with a weird mist shifter then buy this book to check it out yourself.