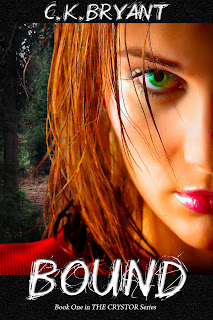 Summery
When a photo shoot ends in tragedy, Kira discovers her best friend, Lydia, has been keeping a secret. Knowing the truth, and accepting it, will change Kira’s life forever and thrust her into a world of ancient curses, magical objects, and savage enemies. What happens next will challenge everything Kira knows about her world, herself and the shape-shifting warrior she’s falling in love with. No longer the timid mouse her mother accused her of being, but a woman who finds the mental and physical strength to endure and survive. BOUND is a heroic tale of true friendship, infinite sacrifice and untamed love.

My Thoughts on the Book
This book wasn't what I expected when I bought it. I was looking forward to a book on what I thought was about shapeshifters, but no shapeshifters appeared until later into the book. When they did appear, they were half man, half beast, not the traditional shapeshifters I'm used to. These shifters were also aliens which surprised me because I didn't think this book would have aliens in it. They were humans, mostly but they lived on a different remote planet. As one of the characters pointed out, by drawing the solar system on the ground then tossing a rock away from it, that can show how remote they are. Despite this, I didn't expect I would like it as much as I have. I'm looking forward for the release of the second book.

The characters were great, and each had his or her own way of acting about a situation. Kira, our main heroine, was known to be a mouse, but I never saw that in her. While she is timid, as the story continued she does show how strong she really is, such as when she tried to help Lydia when men attacked them. If she was a mouse she would have stayed away from the danger. It angered me when her mother left her, running off with a man instead of taking care of her daughter. Kira wasn't even 18 at the time, making the abandonment even worse for me. Teenager or not, Kira was still a child. Lydia is a sweet girl with a side to her that surprises you. She also has a connection to Kira that allows them to communicate between each other using thoughts. She's very protective of Kira, as she is her only friend. Octavion is a character who catches your attention with his name alone. He's described as having a sculpted chest, leather pants and vest, and being hot. (How do I end up reading so many books with hot guys?) Octavion has a really bad temper, a side effect of being able to transform into a catmonster. He ends up hurting Kira a few times with his temper. Despite that he really is a nice person and cares both for Kira and Lydia. You can see how much he is torn between how to protect them both. He struggles with being around Kira and trying not to hurt her because of how much he loves her.

Octavion and Kira like each other so fast you don't know what you missed it. Yes, Octavion had feelings for Kira already but Kira just met the guy and she started to like him right away. Even when he pushed her around and hurt her she still develop feelings for him. I for one wouldn't like a guy if he made me break an arm. However, they do end up getting together. It's a cute romance, and awkward at times like in most relationships, but it just moves so fast. At one point you seriously thought he was going to purpose to her. I just hope in the second book the romance is more controlled and not as fast.

The plot was great, I loved everything that happened. It's a very action filled book, and moves quickly. I found some ideas interesting, especially the ones from Lydia's and Octavion's home planet. For example, Royal's can turned into a beast when there is a new moon and can't control their hunger when they smell blood from a commoner. I also like the different types of people on that planet. The confrontation with Lydia and her older sister was great. I cried once though because Kira was very badly hurt near the end of the book. I really do like the plot and I'm sure you will too.

The book design is great, the bright green eyes catch your attention right away. Everything in the cover gives a bit away of what's in the book but you won't know what till you read it. I love how she is the main character which you will know once you start reading the book. I'm not a fan of the font that was given to the book's title however. It looks like it was scribbled on, and a cleaned Italic font could have had the same effect.

Overall
If you're into the Science fiction, I highly suggest this book. It's also good for a light romance novel and action/adventure fans. It was a great read once you get into it. It's a bit slow at the beginning, but it picks up quickly. Very worth the read.