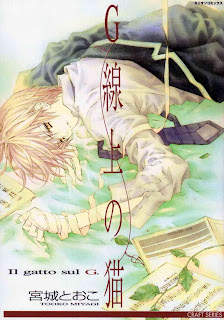 
Summery
Riya Narukawa is a high school freshman with a tremendous talent for the violin, and an equally large bag of mental issues. He seems to have a split personality. After injuring his own hand to compromise his playing ability, he winds up on the doorstep of college student Atsushi Ikeda. Atsushi's a nice guy, maybe too nice and generous. He takes Riya in for the night and helps him with his hand injury. Atsushi realizes there is much more Riya than is on the surface, and learns just how difficult Riya's life actually is. Not only does he have a personality disorder, but there's an aggressive senior at his school who has his eye on him. Atsushi becomes a sort of safe haven for Riya, an escape from the life of music he's been bound to.

What I thought about the Manga
To read a manga that has to do with Split personality's is new to me. I've never came acrosss this concept before and I got to say it was really well done. I love the whole plot line that made up 3 volumes of manga. If it was any shorter then that I don't believe I would of liked it as much as I do now. I didn't like reading that the split personalties were cause because of abuse his father gave him but dispite that Atsushi Ikeda stayed by Riya's side, loving both parts of him.

Riya has two personalties both of whom I like. One side is called White, that is the calm, vilolin loving Riya that loves to go to school to play his Viloin, the white Riya also has no clue about the black Riya. Then there is the Black Riya who doesn't like the vilollin those he tried to cut his fingers off, he also a trouble maker and hates everything about the white Riya and the people who only love him. The black Riya is the one runs into Atsushi and when the white Riya wakes up he gets afraid and runs off. I really love the back and forth motion of Riya it's interesting and I love how Atsushi tries to deal with both of them the best he can. Atsushi Ikeda is just a normal college boy but he soon starts to take care of Riya in Riya's apartment at the request of Riya's Uncle. This made the story even better I find because now Atsushi is by Riya's side everyday and he starts to develop feelings for Riya.

The romance is slow but is sweet between the two. Dispite the fact that black Riya kept trying to make Atsushi sleep with him, Atsushi denyed him because he didn't think Riya loved him back. I think having that trate where Atsushi cares so much about him but won't act on his feelings untill Riya was ready is so cute I love him for it. There is another guy that Riya runs into a lot who tries many times for forcfully take Riya but it never goes right and I'm glad for that. Atsushi and Riya are meant to be together! 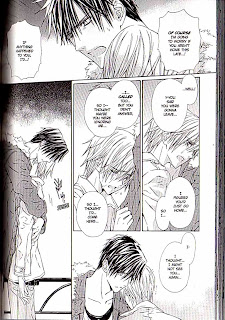 Design
The drawings are really well done in this manga. The drawings are cute and has tone of detail. You can see the emotion of the characters right away. Even the hair has detail in it, this story became much more interesting because of the great drawings. The background as well is almost always drawn which is great.

Overall
I highly recommend reading this manga, it has a great plot, great characters, even the romance is great and sweet. You will really love this yaoi manga because I did!