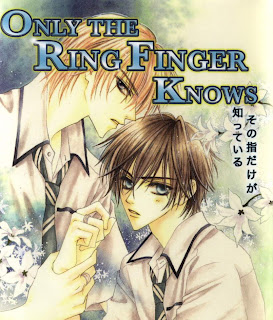 Summery
At Wataru Fujii's high school, it's all the rage to wear paired rings with the girl you love. Wataru wears one though he is single, and one day inadvertently discovers that his ring pairs up with that of tall, handsome and smart Yuichi Kazuki, the senior classman idolized by the entire school. Though Kazuki has a reputation for being kind to all, when dealing with Wataru, he is strangely harsh. Their paired rings somehow draw them together and the two alternately clash and attract, as they must sort out their budding feelings for each other.


My Thoughts on this Manga
Surprisingly this manga was the first Shonen ai manga I've ever read it was back around 2005-2006 when I first began to love Shonen Ai and soon Yaoi. This manga makes you fall in love with the characters so fast that you don't want to put this book down.  It's sad that it's only one volume, there could have been so much story to it, but then maybe that's why there is only one. It wants to leave you at a happy ending type thing where they are together after some struggles.
The manga revolves around two rings that are simler to each other, bringing the owners of those rings together. It's so cute, I even cried at a part of the manga when the main character believed the other boy was in love with a girl. One volume and it brings you to tears is good in my book. There is only kissing near the endding of the book and that's prefect for me, since the plot is so well written it didn't bother me. 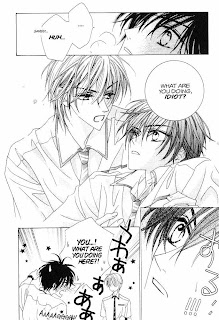 Design
The drawings are so cute and detailed, it's a somewhat older style of drawings then there is now but it's still so cute! Sometimes there isn't a lot of detail in the hair as you see in the image on the left, but getting cute images like this one makes it well worth it. Same goes for the clothes and location but the cute moments make it up for it believe me. The cover is also the same cover as I remember it, it hasn't changed at all.

Over all if your looking for a story that isn't heavy on boy love then this is prefect for you. The story only has kissing at the end of the book. The romance is slow and only a little bit and the drawing is really great for it's time. I recommend it to everyone if you haven't tried Shonen ai before and just want to start getting into it.
Rating
4 out of 5 howling wolves