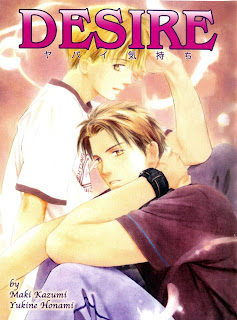 
Summery
Toru is a shy and quiet student who has developed a special crush on his close friend Ryoji, the most popular member of the high school swim team. In front of Ryoji, Toru hides his feelings and acts as if he is just one of Ryoji's good friends, but in a moment out of the blue his world will be turned upside down as Ryoji will confess a secret desire for Toru. Dazzled, Toru can barely hide his excitement for Ryoji and quickly accepts his offer. As time passes, Toru's happiness begins to fade knowing that his affair with Ryoji was just a fling based out of Ryoji's sexual curiosity.

Toru, adamant about his feelings for Ryoji, confides in another one of his close friend, Kashiwazaki, about his dilemma. The two set off to devise a plan to test Ryoji's true intentions by faking a romantic relationship. Soon after, a frustrated and jealous Ryoji attempts to pry Toru out of the arms of Kashiwazaki. Is it just as they planned? Yeah! That is of course until Toru realizes Kashiwazaki wasn't really faking! How could he not have seen it coming?

My Thoughts on the Manga

So this is how the manga starts:
Ryoji: I Wonder why...
Toru: why what?
Ryoji: When I look at you, I get...turned on

My eyes just practically popped out of my eye sockets! If the author wanted to capture someone's attention in two seconds that was the way to go. I almost dropped my laptop I'm series that's how much that surprised me!! That was the best starting to a yaoi manga so far from what I've read this year hehe!


The characters are all so great in this manga, it's sad that Toru is so scared to confess his true feelings. He just can't bring himself to tell Ryoji despite how far they go. He would rather hurt himself then tell Ryoji the truth that may end their friendship. Ryoji, I just want to smack him so badly, even after Toru tells him no he still continues. He wanted to satisfy his curiosity then listen to Toru when he says no and despite that Toru still likes the guy! I just can't believe how Toru still continued that releationship even when he knows Ryoji is using him. Then comes Kashiwazaki he tells Toru they should date to teach Ryoji a lesson or at least make him see his mistakes. Of course this doesn't work for long becuase Kashiwazaki kisses Toru and Toru relalizies that he was doing the same to Kashiwazaki that he's been doing to Ryoji so he ends it.


The Romance is fast and well it's all on Ryoji. Like I said he didn't care about Toru when he tells him no and even when he was doing that stuff with Toru he was still with his girlfriend. This romance is complex but it make sence in the end.


despite everything that happens I really do like the plot, it's different and interesting. Not to mention I sometimes like it when the relationship is not exactly mutual and I find it works in this situation especially with how it ends. To bad there wasn't much on Kashiwazaki I wish there was more so we can see what happens to him, but oh well. 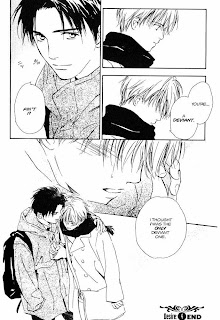 Design
With it made in 2001 it's really close to the 90's style manga drawings. It's a bit close to the 2003-2004 style so it's in between. I like this style, it's simple and relaxed in it's drawing. Sometimes the background is shown other times it's not but it's fine because it focuses on the characters and their feelings like you see to the left. There is detail in the clothes and expression which is nice to see. The hair is simple and laid back kind of drawing.

Overall
I do reccomand this yaoi manga, it's really cute and it will draw your attnetion in right away. Also it's a great second starter yaoi manga, it's in between shonen-ai and soft yaoi so it's safe for new Yaoi readers who are a bit use to shonen-ai already. Again if you don't know what yaoi or shonen-ai is I reccomand looking it up or you will have a heart attack @_@

Believe me I will do normal manga soon!!!