Summery
Kojima seeks to befriend the class outcast, and soon learns of Nakahara's troubled family life - of his uncaring, abusive father and mentally unstable mother. As Kojima yearns to somehow comfort Nakahara, he gradually becomes aware that his feelings for the other boy arise from more than mere sympathy. When Nakahara declares his own romantic feelings for Kojima, their relationship becomes one of sexual exploration as they face their first steps into adulthood together.
My Thoughts on this Manga
I'm not very picky on what kind of Yaoi manga I read, I pretty much read them all. A few times I think I have dajaview on a yaoi that I've read and turns out I have read this before I just don't remember when. The only difference is that I decided to write a review on it.
Basically this story is a nice Highschool tale, with a loner trying to run away and a kid stopping him from doing so. They soon become close friends and learn of how each other lives. You learn one kid has problems at home with his parents, and just wants someone to care for him.  It's a cute story with a interesting plot but has been done quite a few times with other manga's I've read. Though the story is sad it didn't make me cry or feel much for the character that much. Romance doesn't happen till the end of the first book, which is good because it took much longer for one of the boys to like the other back. It was all kissing till the third book so the romance isn't fast paced as most Yaoi manga out there. 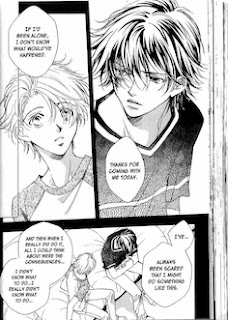 Design
The design and overall look of the characters is a cute style type of drawing. The characters look their age and there is detail in the clothes, hair, character and locations. The eyes especially draws you in making you want to try to relate to the character.
This Mangaka took time in doing the shirts and hair as you can see in the left image.

Overall if your looking for a cute story with a interesting storyline, great drawings and Slow Romance, then this is for you. I finished the three volumes in one and half day since I took breaks to read this manga. I have read other books from this author so I reccomand to at least check the author's other manga's too.
Rating
3 out 5 howling wolves