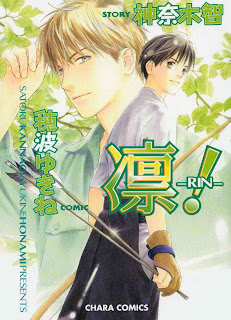 Summery
Katsura, a second year in his high school's archery club, has a hard time controlling his nerves. His "secret weapon" is his brother's best friend and childhood buddy, Sou! One hug from Sou and Katsura's nerves are soothed to a peaceful calm. But he can't keep Sou around him forever. As he wonders how he'll survive without Sou's hugs, his friend Kouichi suddenly asks if he can be the one to save him, and kisses him! What now?!


My Thoughts on the Manga
This manga was a very cute manga, After the first volume I had to take a break for a few days before reading the other two though. I believe the first volume was enough, the other two was more like fillers then anything else. Though they were also a great read too but not nessassary.
Katsura is a cute boy who became hurt when Sou told him that he was just doing Katsura a favor by hugging him (hiding his real feelings). Being hurt Katsura's archery started to fail, not to mention it became worse after Sou confesses his feelings. Yes most of this manga revolves around archery and how Katsura struggles to become a good archer. You see he becomes more and more confident in himself as the manga goes. By the end of the manga series you see that he trusts his archery more and actually hits the target quite a few times. Sou has to struggle with himself in trying to believe in Katsura and their relationship and how Sou should trust that Katsura decisions.
The relationship in this manga is cute and simple. There is a love triangel which you somewhat feel sorry for the other guy. Kouichi loves Katsura as well but knows he can't win against Sou but he doesn't give up and makes small moves on Katsura despite him being in a relationship with Sou. I love these three characters and they work well with each other. 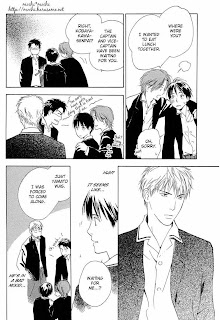 The design for this manga is simple and cute. It's doesn't have a lot of detail most of the time. Only sometimes does the designer plan to put detail in the panels. It is a type of style for the time this manga came out. Though I would have liked if they put a bit more detail in the facial features. I don't really mind it because of the story, since the story was alright I didn't mind the type of drawing it was.


Overall
If you like a cute story and simple story check this manga out and read it. I'm sure you will like the cute story.