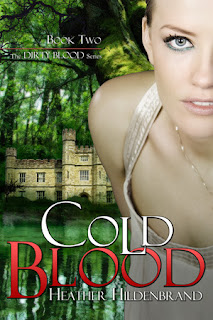 
Summery
Wood Point Academy is not at all what I expected. For one thing, it looks like a cross between military school and Buckingham Palace. Everyone stares, the floors shine so bright you can see your reflection in them from a mile away, and no one smiles. Unless they're kicking your butt in the process.

At least I've got plenty to take my mind off the fact that my psycho cousin, Miles De'Luca, keeps calling and declaring his love and promising to come for me just as soon as he's destroyed anyone standing in our way. Wes isn't going to like that idea. So between Miles, Wood Point's evil welcoming committee, and the drill sergeant hottie trainer from hell, I just keep asking myself, how did I end up here?

My thoughts on Book
So after finishing Dirty Blood which is the first novel of the series I had to buy the second novel right away. I was not expecting this novel to be as good as the first one, it was more then good it was awesome! There was more intereaction with characters, good plot line though the location was different and the ending will leave you breathless and wanting more.

There was lots of new characters in this story, Cambria and Logan are Tara's friends at the hunter school. Both Cambria and Logan help Tara with Miles and don't care that she is a Dirty blood. I believe with out those two this book wouldn't have been as good. Then there was Alex, I knew when I saw a boy cameo in the first book where he saved Tara in the house fight and it showed how aw struck she was about this hunters eyes that he was going to appear in the second book. I knew it and guess what I WAS RIGHT ALEX IS THE HUNTER THAT SAVED HER. I'm so glad that he returned in the second book. You learn that his mom was killed by werewolves and that he was bitten so he hates werewolves and he couldn't stand Tara at first because of that. He is Tara's trainer at the hunter school and there was such great chemistry between them that I was addicted. I couldn't help but think they should kiss everytime they faught. Yes I am a Wes/Tara fan but for some reason I'm always drawn to the side guy. God he's so hot, I would love if he attacked me any day haha. Despite the hot chemistry between Alex and Tara, Tara still loves Wes and she is still with him even in the end of the book. (I'm pretty sure the book hasn't ended yet)

As for the plot it was great! Miles running around doing who knows what while leaving creepy messages for Tara. The whole school hating Tara cause she's a Dirty Blood, Victoria(new character at the school) causing her to have a mesiable time at school. Alex and his training and Vera in the mix. Everything about the plot was great! I couldn't have thought of anything better then this!
Cover Design

I just love the cover, no doubt about it. The background is great, it shows how the school looks like. It shows how it's located in a forested area which is exactly the same in the book and the girl infront looks ferce and the makeup around her eyes stands out really well. I like everything about this cover, the cropping of the girl and castle is really well done as well.
As for the title and font of the book, how the words "Book Two The Dirty Blood Series" is at the top left of the book. I think it should be with the rest of the title fit in somewhere there. It's too blended together with the green background that it's hard to see. On the other hand the title of the book is prefect and is the same font and style used in the first book of the series. The placement of Heather Hildenbrand is also prefect how if fits below the letters.

Overall
If you haven't read the first book go read that book now. This series is really well written. If you love werewolf novels this is a great add to your collection. The series so far is good and I was never bored with it at all. The new plot line mixed with the old leads to a great read and I reccomend this to everyone.
Rating
5 out of 5 Howling Wolves