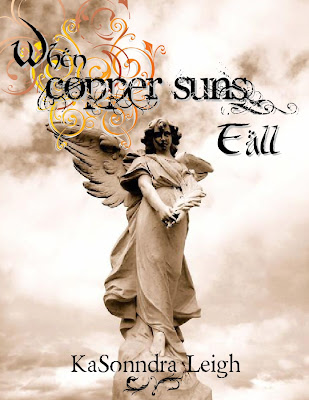 In fifteen-year-old Chela Prizeon’s city, alchemy is forbidden and angels hide among the mortal. With a deadly virus ravaging the globe, Chela’s nightmarish memories compels her to experience a past riddled with gloom, and now her brother is infected.

Chela’s only hope is the Caduceans, slayers sworn to protect the last seven Light Keepers and the ancient memories they share. A group led by the sometimes elusive, sometimes infuriating boy who intrigues Chela. But can she trust this boy with the mysterious past, someone who can influence her memories?

With the Caduceans aid, Chela races to defeat her rivals, to unearth dark family secrets, desperate to find a cure…only to discover the glutovirus is far more than a simple disease.

In this haunting debut, KaSonndra Leigh offers an escape into a world as intriguing as The Mortal Instruments and a story as chilling as Enclave. Full of celestial creatures, fascinating villainy, high-stake choices, and a secret romance, When Copper Suns Fall, is a fresh and original urban fantasy—with a dystopian twist—that will take readers on an unforgettable adventure.
My Thoughts on the book
So I first notice this book back when I first learn about how many contest there was on Twitter. I saw the cover of the book and it caught my interess. I wondered what kind of book was this to have a ugly statue on the cover.  So I read the summery of the book and I wanted to read this book right away. I wanted to read it dispite how I felt on angel YA novels and I never read a Dystopian novel before either. (well once "Handmaid's tale" but I only read summery of each chapter) I started to say to myself, I had to win this book no matter what I needed to read it and find out what it's really all about. Not to mention I read a short blurb from a chapter making me wanting it more and poof! I know have it in my hands(computer) and I read it in three days, THREE DAYS THATS HOW MUCH I ENJOYED THE BOOK!
I love this story so much, the book was slow at the beganning but once I got into it I couldn't put it down. The characters are amazing, Chela Prizeon who is our main girl has such a great personalty you can tell when she's scared or happy. You can tell she's trying to find her inner self, learning about her abilties, scared at first but with a help from the boy Faris she finds her strength. As the story goes you want to learn more of what she can do and if she loves the boy. You also notice that her thoughts revolve around her twin brother a lot though out the book, showing how much she cares for her twin brother. Her father though seems like a brainless puppet cause of the Tribunal(government) but you do see him care about his daughter and son more then you think.
Then there is boys of story are eye candy diffidently, Jalen the older brother type boy who will look out for you. Faris the sexy, hot, sexy....I'm saying sexy to many times but it's true he captures your heart right away with his mysterious past and crazy fighting skills. Then there is Seth, the bad boy mysterious type that you just want to be with. All these boys are great and all these boys Chela has a connection to. I just love them all, could there be a love triangle who knows this is only the first book of the series.
I can't giveaway much because I don't want to spoil it for everyone but I will tell you this, it's a great read and I recommend everyone to read it. The plot is awesome and the characters are awesome. This book is so different from what I normally read that it's just so surprising. I'm excited to read the next two books. That's right there is two more books coming and I'm so damn excited!!!
Cover Design
Sorry but I'm going to have to pick at the cover design. Who ever design the image in the back I want to chew to death. Seriously, how could anyone releate to the story with a weird picture of a statue. Yes, the author probably liked it but if I didn't read the summery of the book I probably would have walked by this cover if it was in a book story. Maybe they wanted to show it because it was a statue of a angel but I think it's just lazy design work. The only thing I do like though is the font, the font(title) is so nice it fits with the story very well.
If it was me I would have showed an actual girl with wings, or maybe a close up of a girl with a gemstone necklace, since the necklace is always talked about though out the book. I think that would have made a pretty cover, or even just showing wings. (how I wish I could start designing books)That's all I have to say, about the cover, I'm real picky when it comes to covers, they have to catch my attention before I pick it up off a shelf. If a cover is ugly, I don't care how good it is I won't check it out at all.

Rating
4.5 out of 5 Howling Wolves