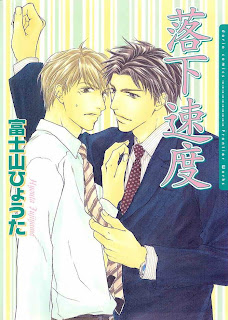 Summery
Nanase Youichi graduated from Kinsei Academy, which is popular for having a 90% gay student population. However, Nanase is straight as an arrow and managed to graduate with no one topping him, his nickname even used to be "The Iron Wall". But one day, his heterosexual business partner, Tsutsumi Renji told him that Nanase is attractive and can't help himself from wanting to touch him. Nanase allows Renji to touch him for only 3 minutes...

My Thoughts on the Manga

Yes this manga is a mature yaoi manga is a 18+ yaoi so if you haven't tried to read yaoi before I suggest not to start with this manga. As well as if you don't know what Yaoi means I reccomand looking it up so you don't have a heart attack hehe!
So in this manga it tells a story about Nanase and Renji, who are business partners together. Renji started to have feelings for Nanase and wanted to test it out to see if it was real. The whole story Nanase doesn't know if he can be gay or not because of his past beliefs. I really like this story, it tells of the struggle a person has when they have feelings for someone but they aren't returned right away.  You can see right away that Nanase doesn't right out hate Renji after learning that he has feelings for him and you see that he may actually have a bit of feelings for Renji even if he denies it.

The romance in here is a bit fast, but since Nanase is at first straight it's a rough romance at the beganning. It's not until like 60 pages in do you see the romance becoming faster and for a oneshot manga that is good. It's not to fast not to slow just perfect from what I see.

The manga though at the end leaves you hanging, it leaves you wanting more then there is. I haven't found to many manga's where I wish there was more but I kinda wanted to bite the mangaka(author) for ending it with only one volume. Though I guess if people like the mangaka they would look for more, maybe that's why who knows. 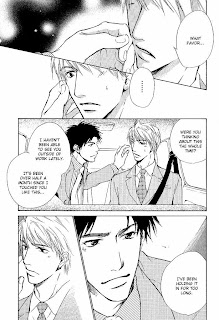 This manga has a grown up feel to the way the manga is design. The characters actually looked their age(27 and 25) and you see that it isn't one of those cute yaoi manga's either. The drawings are kind of layed back, as in sometimes there is lots of detail and in other times there is none but you can see there expression even if there is hardly any detail. The As you can see in the picture in the left, sometimes there is no eyes but with only a mouth you can still see what they are feeling. Sometimes the background is not even needed because of how much your focus on the characters, that's how good the manga is if you are only interest in the story and not the images. Believe me when I say, I've read manga that have really ugly drawings but the plot line is so good I can't put it down just for the design.

Overall
If your use to yaoi manga and want to read a great short story I highly suggest it. If your not looking for a oneshot yaoi manga then don't read it.