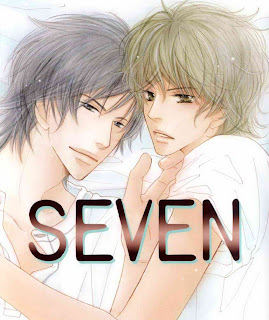 Summery
Nana has no memory of his childhood earlier than age 12 when a store owner took him in and named him Nana, meaning no-name in Japanese. Mitsuha is on a quest to find a missing childhood friend. The two meet when Mitsuha ends up crashing at Nana’s place at the insistence of a mutual friend. At first Nana loathes the very existence of Mitsuha. However, he gradually warms up to his sincerity and kindness and finds happiness in awakening beside him.
My Thoughts on this Manga
This manga is two stories put into one but are related through brothers. I was annoyed me a little bit, yes It was a cute story but at times it was just confusing. Near the ending I was so lost on what was going on it wasn't till the second last page did I realized it took place years later . . . Everything in this manga was so fast pace like the author wanted to finish the story and get it out there fast. As well as seeing that there was only kissing in this story made me mad, fast story, not doing anything more then kissing killed it for me.


Though I gotta give this manga credit somewhere, and truth be told at some points i did feel connected to what the character was feeling. I think I almost cried at one part but sober up pretty fast. Though there was a quote that caught my attention that I thought was cute and gave the character strength to believe that he will be fine in the future:

“Before I go, Lend me your hand.  I can’t see anything anymore. I do want to take you with me, but I don’t think I can. My darkness may never end, but yours will. Even when it’s raining . . .  even when it’s cloudy . . . when morning comes, darkness shall be no more. All you have to do is open your eyes and your darkness will clear." 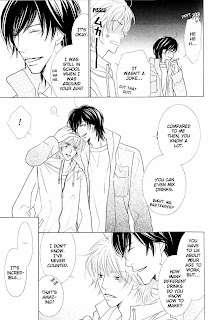 Design
The design was alright, it wasn't as bad as some art I've seen out there but it wasn't the best either. The drawings looked like they were rushed at time and at other times it looked as if the artist actually took her time with it. Like in the detail of the dark hair guys jacket. The background is hardly ever drawn but even when it is, there isn't much detail to it anyways.
Over all if you don't mind the lazy drawings and the fast pace story then this could be a good Shonen Ai manga for you. If not then it's okay if you don't read this, there isn't much of a wooooo!!!! aspect to it.
Rating
2 out of 5 howling wolves