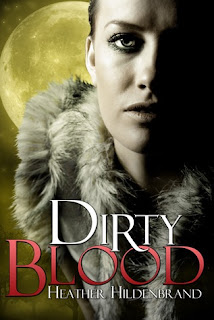 Summery
I killed a girl last night. I did it with my bare hands and an old piece of pipe I found lying next to the dumpster. But that’s not the part that got me. The part that scared me, the part I can’t seem to wrap my head around and still has me reeling, was that when she charged me, her body shifted – and then she was a wolf. All snapping teeth and extended claws. But by the time I stood over her lifeless body, she was a girl again. That’s about the time I went into shock… And that was the moment he showed up.

Now, all I can do is accept the truths that are staring me in the face. One, Werewolves do exist. And Two, I was born to kill them.
My Thoughts on book
So I actually bought this book back in December 2011 and waited this long to read it. I so wish I didn't but now I can add it to my 2012 books. So what I found interesting was how fast the story got good, the main girl Tara kills a girl who turned into a wolf and attack her. She never thought anything like that existed before and was going into shock till our main boy Wes shows up. He tells her that the girl she killed was a werewolf. After that it just gets better and better, Tara learns that she is actually a Hunter and that Werewolves actually exist and that Hunters and Werewolves have been at war for a long, long time. She now has to choose whether she will go with the hunters or stay with the person her brought her into this world "Wes".
My god this book drew me in from beginning to end. The plot was new and different, I haven't yet read a werewolf novel where there has been a long fight between just werewolf and hunters. You can see that author put a lot of thought to the plot throughout the book. It actually took me two days to finish this book, that goes to show how I couldn't put the book down.
The Characters are well written, from the main Characters to the side characters.  Tara is a tough girl and wants to show everyone that she isn't weak like most believe her to be. Just because she grew up not knowing what she was doesn't meant that they could protect her and though out the book she tells them that. Wes on the other hand, deals with how he is a dirty blood and also deals with his attraction to Tara. It annoyed me sometimes when he tried to keep his distance from Tara without telling her anything. I was like come on don't be such a idiot, but then again I understand because sometimes boys act like that, haha! Anyways did I mention how hot he is :Q___ from his gold eyes to his gold fur as a wolf he's all one hot werewolf! The description of him as a wolf is well written and I love how he sounds in the book. There there is the side characters, besides Jack and Fee the others are somewhat unknown since they are only side characters, but I guess it's alright that we don't know much of them.
The romance in this novel is not as much as you may want but when the romance does happen you are glad that it did. The relationship between the two main characters is hot and you want them to be together despite Tara's hardheaded personalty and Wes belief that staying away is for the best.
Cover Design 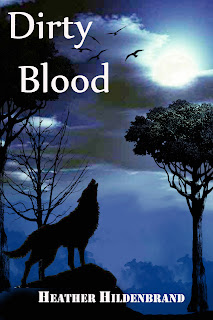 Now I know that the one on the left is a poorly designed cover, bad Title font spacing and look/feel. Not to mention that the image of the wolf and tree and everything in the background looks so pixelated. What I would have done is fix the placing of the title and change the font, then made the wolf stand out more and not so pixelated. Get rid of the trees and birds and raise the cliff up higher towards the moon, maybe even having that as a background and placing  picture of a girl or something on top like the one on the right.


The one on the right is propularly design, the person in front show's fercness that the main character shows and there is a full moon in the background which connects it with werewolves. The Title font is so pretty, the kerning of the words and having blood in red gradient and the author name underneath it fits so prefectly. It's diffently the better cover of the two and I'm glad that the author switched to this one. Though I just notice tree's at the bottom left and really it doesn't need to be there. I also notice that the cropping of the hair looks weird and needs to be redone.
Overall
Overall if your looking for a semi slow Romance, where the characters don't fall in love, or know they love each other right away. As well as a good plot about Hunters and Werewolves that this novel is for you, I really do reccomand this book to everyone who loves werewolves!