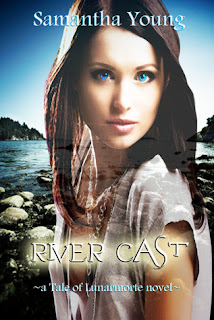 Swept into the world of the Daylight Coven, Caia is caught between her loyalty to the Daylights and her new insight into the hearts of the Midnights. As more obstacles are thrown in her and Lucien's way, Caia is pushed further adrift from him and Pack Errante. With no one to turn to, Caia has to make the most difficult choice of all...

Who does she truly belong with? The Daylights or the Midnights?

YA Paranormal Romance recommended for ages 16 and up.
My Thoughts about the book
That is a seriously short summery . . . Even I didn't know what it was about by reading it. I found the second novel better then the first. It was a lot of jumping around between who was telling the story but that kept it interesting. You would always want to continue to read so that you can get to the next story teller to see what's happening with them. I'm not always a fan of when that happens in a story but it works well here. What I didn't like though is this word ---> OK. All throughout this novel and the last novel all I kept seeing was the word OK. It bugs the crap out of me, either because they use it alot or because it's in caps and it just annoys me seeing it in the middle of the page. Yes, OK is a great word to describe yourself but couldn't the author use okay the right way of spelling it instead of the caps way.
This book you got to know more about who Jaeden is now. Ever since she was taken in the first book and tortured she hasn't been like her normal happy self. So as you saw in the first book she ran away from home and met up with a vampire. You got to really see how she is now what she's doing and how she's found and brought home by Ryder. Who before this never notice Jaeden and then boom he feels something for her and yea it's just so cute!! Caia is coming into her new powers when she vists the center and learns things fast. I think in this book you see how strong she can be. Lucien is still a sturborn idiot well they both are but at least it's soon fixed by just three words.

The Romance in this book between Caia and Lucien is rough and non-existent at the most part till near the ending after Lucien finally says those three words. Then they get together and I was so happy, I thought "finally you idiots!" lol and the chemistry between Jaeden and Ryder are so sweet! I love them together, they acted so cute and I love how old fashion Ryder is dispite how annoyed Jaeden became haha!
As for the plot it was great, it mostly took place at the center of the Daylights and it was great. You got to learn more about Caia powers and about the head of the coven. Not only is it about Caia and Lucien but it also talks about Jaeden and Ryder. They are friends of Caia and Lucien, the story jumps from Caia and Lucien to Jaeden and Ryder and how they are actually mates (finally). Ryder is so cute when he gets all jealous haha!

Wow is all I gotta say, another beautiful cover they came up with. I'm not to sure on why it's called River cast though . . . though it might be describing her power which is water . . . even still why river cast . . . anyways the girl in the front I think it's Jaeden because of the bright blue eyes. The glowing title works very well I liek the glowing of it giving a bit of a mystical feel to it. The author's name at the top of the book could have been moved to be placed below "A tale of Lunarmorte" it didn't need to be at the top over the girls face. Even under the word River would have worked.

Overall
It was a great second novel, everything about it was exciting and I reccomand you people to read this series. A few twists in this one which was very great!!