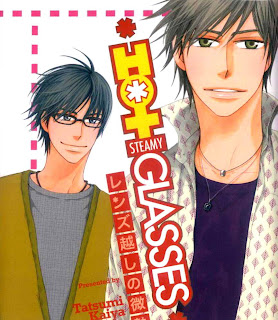 
Summery
By day, Takeo is the president of an up-and-coming IT company. But by night, he's a total otaku. The problem is, for the past 17 years, he's been desperately in love with someone - the self-centered Fumi, a man who happens to hate otakus. No matter how many times Fumi rejects Takeo, the he refuses to give up! But now all of a sudden Fumi is accepting a date with him...?!

What I thought about the manga
Well this manga was alright not really anything that made me love the book. It was another one shot story, where it only takes one manga to complete the story. This book also had a small side story at the end, which I really didn't like because it was so bland. This story would have been a bit better if it was expanded into two manga's to tell the story instead of one. There was so much more detail the author could of gone into if she really cared about the story.

The characters are interesting and so very different. Takeo is a otaku which I can actualy releate too because I'm basically an Otaku as well, judging by my many anime collections and my +700 manga books. Otaku means a huge anime/manga collector, meaning anything that has to do with anime or manga that person collects and buys. I can see why someone like Fumi would be a little annoyed with Takeo who is very geeky. They are friends and so different yet they find a way to be together. I find that cute and I feel so very sorry for Takeo who had this crush for 17 years.

The romance is so idiotic, I hated it so much, and usually I don't really hate romance but I did in this book. Though I did feel bad a few parts when Takeo did anything to make Fumi happy even sending him a girl, which made me sad. Though besides that I hated the fact that it looked like Fumi was forced into the relationship. Everyone kept telling him you like Takeo, you just don't know it and then boom he's decides to go out with Takeo and loves him *eye twitch* it was just too stupid. That's why I think the manga needed to be two volumes long to give Fumi more time to fall in love instead of them doing it right away . . .

The plot is okay nothing really special for me to go into. . . 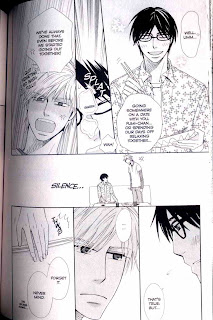 The design is okay for it being a 2006 manga book. Not the best I've seen from that time frame but it's okay to say the least. I really do like how Fumi is drawn he's cute, it's Takeo that annoys me because of how geeky he looks lol but besides that the mangka took the time to draw them well. The background is drawn most of the time and really isn't very needed in other frames. Their expressions tell you how their feeling like in the picture on the left and I like that in a manga.


Overall
It's an okay manga if you want to read and check out, simple romance and all nothing very special maybe something to pass the time. Not to mention I think I've read some other manga from this author and they were pretty good.